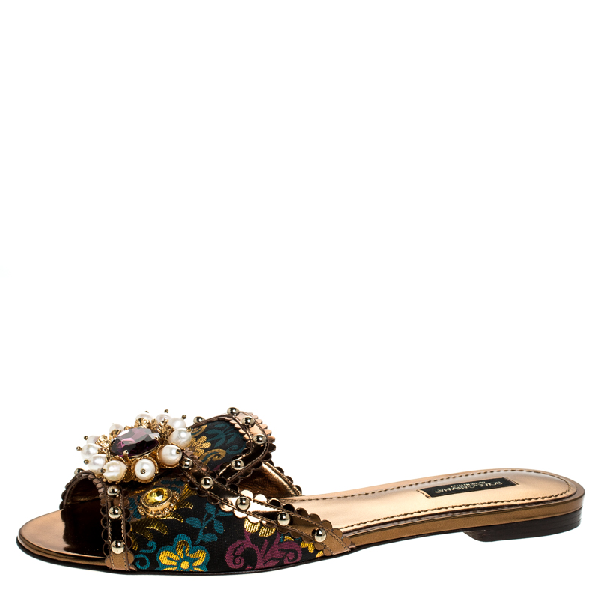 We cant stop gushing over these stunning flat slides from Dolce and Gabbana. They flaunt such exquisite details, like the grand embellishments over brocade fabric, the open toes and the leather lining. You will truly love to own these beauties.

Dolce & Gabbana (Italian pronunciation: [ˈdoltʃe e ɡabˈbaːna]) is an entry level fashion house founded in 1985 in Legnano by Italian designers Domenico Dolce and Stefano Gabbana. The two met in Milan in 1980 and designed for the same fashion house. In 1982 they established a designer consulting studio; in time it grew to become "Dolce & Gabbana". They presented their first women's collection in 1985 in Milan, where a year later their store would open its doors. In 1988, they launched their leotard line, and in 1989 they began designing underwear and swimming costumes. Dolce & Gabbana started to export their products to Japan and other countries like the U.S., where they founded their own showroom in 1990. In 1992, the same year they presented their men's collection, they also launched their first perfume Dolce & Gabbana. They won the Woolmark award in 1991, and the prize "most feminine flavor of the year" in 1993.

A world of fashion, powered by technology. ModeSens pulls from the racks of 16,704 luxury brands, aggregating every product at the item level for a seamless, transparent and secure shopping experience